Anthony joined the team during the Living Heritage of the River Don project in 2017 as the Apprentice. since then he has completed both a level 2 and 3 apprenticeship with the Don Catchment Rivers Trust. Anthony is from Doncaster and loves to be outside helping communities and wildlife along the rivers. He works regularly with the Friends of the Don Valley Way and the Hidden Heritage Secret Streams Volunteers.

In his spare time Anthony volunteers as a Cub Scout leader at 47th Edenthorpe Cub group and also helps to teach sailing with the Doncaster Scouts sailing group. Anthony also enjoys snowboarding, hiking and camping. He is also the percussionist in the Armthorpe Elmfield Band where he plays the timpani, bass drum and is learning to play the drum kit. Anthony has a black Labrador called poppy who is energetic and caring even though she drives him crazy sometimes. 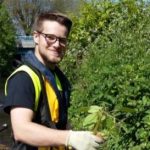