When the Trust was founded one of the earliest aspirations was to help establish a self-sustaining salmon population in the River Don, despite them being missing from these waters for over 200-years. The Industrial Revolution and the following centuries of heavy industry left our river system ecologically dead, with our rivers straightened, polluted and so obstructed with weirs it was near impossible for migratory fish to make the journey to and from the sea.

After huge improvements to water quality and salmon sightings in the lower Don around Doncaster in the 1990s, DCRT along with partners (including Yorkshire Water, Environment Agency, Canal and Rivers Trust, Sheffield City Council and Rotherham Council) set upon a journey to address the weirs on the River Don. Today, all barriers between Oughtibridge in Sheffield and the sea now have fish passes installed or have been removed.

There is still more to do. Although we are excited to see signs of salmon returning with DNA evidence and parr (baby salmon) sightings we still have a number of barriers to overcome before they can reach their original spawning grounds in the Pennines.

In 2018, despite numerous fish passes having been built along the River Don there was still a major obstacle to overcome at Masborough Weir which would become the “gateway” for migratory fish.

Located in central Rotherham, Masborough Weir is a focal point for visitors using Forge Island and is necessary for supplying water to the Sheffield and South Yorkshire Canal. Although the weir is owned by the Canal and River Trust (CRT), this project benefitted from being delivered through a multi-organisation approach. Yorkshire Water, Environment Agency, Rotherham Metropolitan Borough Council and DCRT partnered-up with the Canal and River Trust which brought in funds, skills and expertise and saw the project delivered on-time and within budget whilst facing tightening the covid restrictions, high waters and floods we saw in 2020. 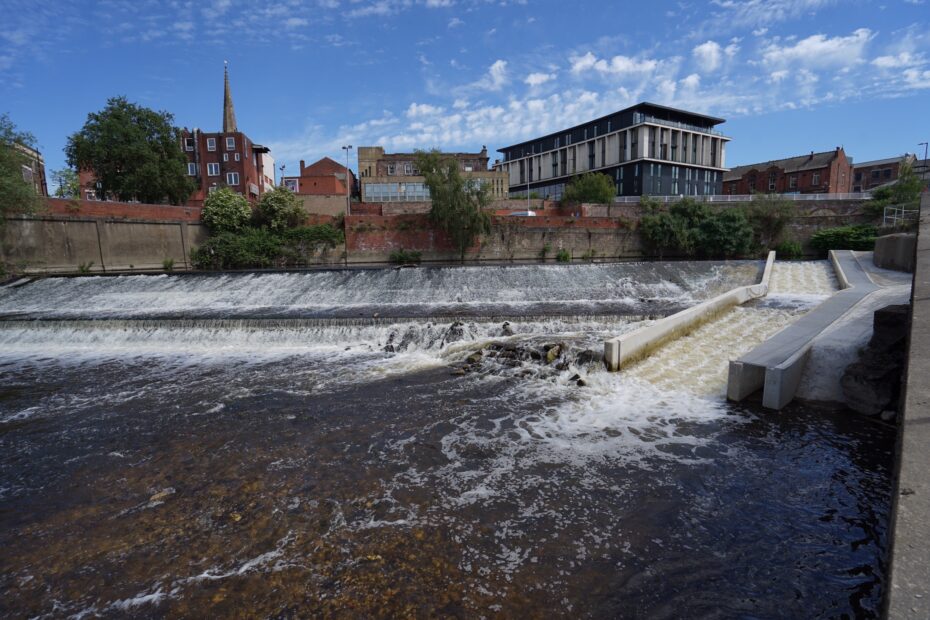